One of the European Commission’s 6 political priorities is to get the EU ready for the digital age, including the ambition to create a Digital Single Market. This knows many facets, such as removing virtual borders, boosting digital connectivity, improving access to online goods and services across Europe, driving online growth, and many others. Digital identity and trust services are key tools here for providing trust and security in the Digital Single Market.

However, over the last few years, we have seen very different implementations of digital identity emerging across member states. Some member states are not even actively developing digital identity at all. According to the European Commission, “this divergence deprives people and businesses of the benefits of the Single Market, as they cannot use secure, convenient and uniform identification systems across the Union to access both public and private services”. 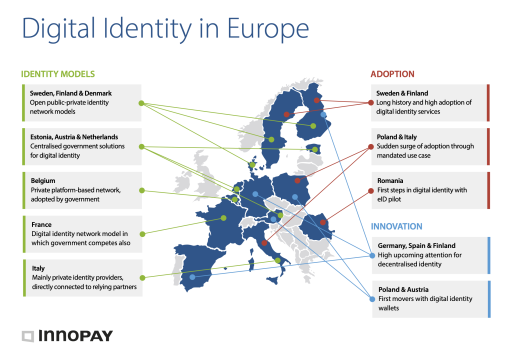 Harmonisation of the market for digital identity is key to establishing trust and security across the Union. To get a view of the need for harmonisation, we need to understand how divergent the existing European landscape is. Here to illustrate the differences in digital identity in Europe, we discuss some member state examples on three different aspects of digital identity:

Member states in Europe have chosen very different identity models. Nordic countries have the longest history in digital identity and have been frontrunners for a long time. Most Nordic countries have converged to a model of close public-private cooperation in a trusted network. Sweden and Finland are particularly good examples of this, where the governments developed a regulatory trust framework and private identity providers offer various solutions in compliance with the framework. The government is explicitly not involved in offering digital identity solutions but leaves this entirely up to the private sector.

This public-private network model is the complete opposite of models chosen by, for example, Estonia and Austria. In these member states, a centralised public solution is offered to all citizens.

Open, public-private networks and centralised public solutions can be seen as two opposing ends of the spectrum, and many variations exist in between. Italy has a similar model of public and private providers to the Nordics but offers relying parties the choice to connect to identity providers directly or via aggregators. France has put a public platform in between providers and relying parties to simplify connectivity. At the same time, the French government is starting to compete with providers by offering a new public identity solution. A final perspective to mention is Belgium, home to a platform solution initiated by private sector parties and now seeing government investment and adoption by public services.

The degree to which digital identity solutions have been adopted by citizens is determined by many underlying factors such as track record, mandated usage, stimulation of competition in the private-sector, and priority on the political agenda, to name but a few.

Nordic member states have by far the highest level of adoption in Europe, with the majority of the population both in possession of digital identity and using a multitude of public and private services. Then there are countries like Germany, where the majority of the population has an eID card, but usage of this eID for accessing digital services is still very low. Some member states have seen recent spikes in adoption because of mandated use, for example to access child-related government benefits in Poland or specific coronavirus-related financial support in Italy. Lastly, some member states like Romania have only just begun piloting eID cards, so adoption is non-existent.

To understand the digital identity landscape in Europe, we must also look ahead to what is coming. While Germany and Spain are currently not considered frontrunners with their existing digital identity implementations, there is a lot of identity buzz in these countries. Big consortia are emerging, revolving around decentralised identity and Self-Sovereign Identity (SSI), and are aspiring to become leading on digital identity. Finland, a long-standing frontrunner, is also reinventing itself in the field of decentralised identity. And looking ahead at wallet-based identity interactions, Poland and Austria have already launched new wallet-based solutions ahead of the curve in Europe.

Christian van Ramshorst is a senior consultant at INNOPAY with numerous publications around digital identity, data protection (GDPR), and corporate strategy. Daniël den Boer is a consultant at INNOPAY. He has used his expertise to help financial institutions and mobility organisations with the creation of new business models and is an active contributor to state-of-the-art insights into digital currencies and digital identity.

INNOPAY is a consultancy firm specialised in digital transactions. They help companies anywhere in the world to harness the full potential of the digital transactions era by delivering strategy, product development, and strategy execution in the domain of digital identity, data sharing, and payments. Their services capture the entire strategic and operational spectrum of the client’s business, the technology they deploy, and the way they respond to local and international regulations.

This article was originally published by Innopay. Access the original here.

digital identity
European Commission
SSI
Views expressed in this opinion piece are solely those of the author. They do not represent the views of the Support Centre for Data Sharing or the European Commission.
<< back to News
For questions and comments, please visit our forum on Futurium.